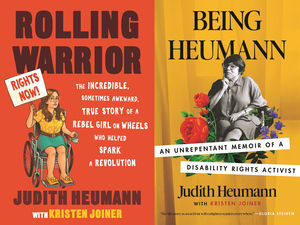 Join the Boston Public Library for an online author talk with Judith Heumann, author of Rolling Warrior: The Incredible, Sometimes Awkward, True Story of a Rebel Girl on Wheels Who Helped Spark a Revolution and Being Heumann: An Unrepentant Memoir of a Disability Rights Activist. This program, which is part of our Repairing America series, will be moderated by writer and activist Kristen Joiner.

This program will happen over Zoom webinar. Please visit this link to the BPL's registration page to register: https://boston-public-library.zoom.us/webinar/register/WN_EyZPFnSsQHi0CWyEsmMOeA.

As featured in the Oscar-nominated documentary Crip Camp, and for readers of I Am Malala, one of the most influential disability rights activists in US history tells her story of fighting to belong.

Judy Heumann was only 5 years old when she was first denied her right to attend school. Paralyzed from polio and raised by her Holocaust-surviving parents in New York City, Judy had a drive for equality that was instilled early in life.

In this young readers’ edition of her acclaimed memoir, Being Heumann, Judy shares her journey of battling for equal access in an unequal world—from fighting to attend grade school after being described as a “fire hazard” because of her wheelchair, to suing the New York City school system for denying her a teacher’s license because of her disability. Judy went on to lead 150 disabled people in the longest sit-in protest in US history at the San Francisco Federal Building. Cut off from the outside world, the group slept on office floors, faced down bomb threats, and risked their lives to win the world’s attention and the first civil rights legislation for disabled people.

Judy’s bravery, persistence, and signature rebellious streak will speak to every person fighting to belong and fighting for social justice.

One of the most influential disability rights activists in US history tells her personal story of fighting for the right to receive an education, have a job, and just be human.

A story of fighting to belong in a world that wasn’t built for all of us and of one woman’s activism—from the streets of Brooklyn and San Francisco to inside the halls of Washington—Being Heumann recounts Judy Heumann’s lifelong battle to achieve respect, acceptance, and inclusion in society.

Paralyzed from polio at eighteen months, Judy’s struggle for equality began early in life. From fighting to attend grade school after being described as a “fire hazard” to later winning a lawsuit against the New York City school system for denying her a teacher’s license because of her paralysis, Judy’s actions set a precedent that fundamentally improved rights for disabled people.

As a young woman, Judy rolled her wheelchair through the doors of the US Department of Health, Education, and Welfare in San Francisco as a leader of the Section 504 Sit-In, the longest takeover of a governmental building in US history. Working with a community of over 150 disabled activists and allies, Judy successfully pressured the Carter administration to implement protections for disabled peoples’ rights, sparking a national movement and leading to the creation of the Americans with Disabilities Act.

Candid, intimate, and irreverent, Judy Heumann’s memoir about resistance to exclusion invites readers to imagine and make real a world in which we all belong.

To purchase copies of this book from Trident Booksellers & Cafe, one of the BPL's community bookstore partners, please visit their website: https://www.tridentbookscafe.com/event/bpl-event-judith-heumann-%E2%80%94-disability-rights-activist-and-author-rolling-warrior-and-being. Use the code BPLSHIP for free media mail delivery!

Judith Heumann is an internationally recognized leader in the Disability Rights Independent Living Movement. She has served in the Clinton and Obama administrations, and she was the World Bank's first adviser on disability and development. Heumann is the author of a memoir, Being Heumann, and her story was featured in the Netflix documentary Crip Camp: A Disability Revolution (2020). Connect with her on Twitter (@judithheumann) and Facebook (TheHeumannPerspective).

Kristen Joiner is a writer and activist who tries to tell stories that change how people see the world. Her writing on exclusion, inequality, and social change has been published in Stanford Social Innovation Review, Stuff and other outlets. She lives in New Zealand with her family.