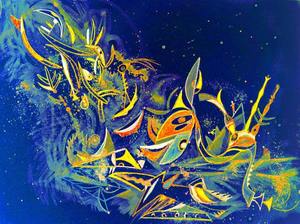 individual CULOMBA bios
Mezzo-soprano SOPHIE MICHAUX is an active performer of Opera, Oratorio, and as a chamber music singer based in Cambridge, MA. Although she focuses on classical music, her versatility and musical curiosity have brought her to be an active performer in other repertoires including French Cabaret songs, Yiddish repertoire, as well as various world polyphonies.

ADAM JACOB SIMON (b. 1987) is a composer, baritone, and guitarist active in the Boston area. Recent commissions from Conspirare, Lorelei Ensemble, The Rivers Conservatory, WordSong Boston, The Oriana Consort, and The Mak'haylah Choir in Lexington MA. His vocal music, described by the Boston Globe as "full-throated and exhilarating", has been performed throughout the US and Europe. As a baritone soloist, he has been praised as singing with “wonderful romantic lyricism” and “reassuring warmth” - Rutland Herald (VT). Adam was born and raised in Cambridge MA, where he still resides.

LYSANDER JAFFE, originally from Conway, MA, is a versatile musician based in Boston. He is a brilliant violinist and violist, adept at both classical and folk styles. He has traveled extensively to Georgia, Turkey, Kosovo and and Bulgaria, studying and documenting traditional music. As a vocalist, Lysander has a wonderful command of the ornamented styles of Georgian, Albanian and Corsican singing..

Joseph Allred fits the "guitar soli" realm perfectly, fully embodying the guitar loner typecast. His guitar style falls in line with Robbie Basho, not only in his 12 string playing that clearly has a leaning towards eastern musical traditions and droning free form raga but also in his educational background in Philosophy and Religious studies. He has been very quietly putting out records for years, never self promoting any of them and painstakingly designing and hand printing most of the packaging for the LP’s and cassettes.

Joseph was one of 5 guitarists who performed at Journeys in Sound's "American Primitive and Experimental Guitar Summit" that occurred this past summer at Church of the Advent in Boston. His music often gets lumped in the categories of "american primitive", "psych folk" and sometimes "experimental". Whatever you wish to call it, there’s a sincerity in Allred’s music and his way of life that is very refreshing.
https://scissortail.bandcamp.com/album/fire-and-earth

make a free reservation below...
https://polyphonic-singing-guitar-soli.eventbrite.com/
suggested donation with reservation $15, $10 for students & those on a fixed income **CASH ONLY**
$2 more without a reservation if room is not to capacity