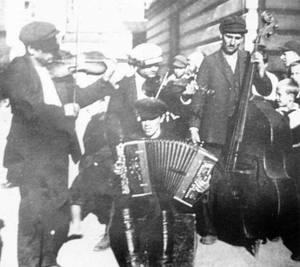 Cambridge born violinist Yaeko Miranda Elmaleh has quite an interesting life story. Having started violin lessons at the age of 3, Yaeko was influenced by her multicultural background with her parents immigrating from France and El Salvador in the 60's. Her musical style can be partially attributed to the passionate and artistic musical tastes of her family. Her grandfather was an accomplished impressionist painter and musician who performed with Django Reinhardt and other musicians during the 40's and 50's Bohemian era in Paris. A grandfather in El Salvador was classically trained in guitar under Agustín Barrios Mangoré and a great grandfather in Boston was a jazz clarinetist.

After classical studies at the New England Conservatory Preparatory School, Yaeko continued on to get a degree in Contemporary Improvisation studying with Ran Blake and Klezmer Conservatory founder Hankus Netsky.

Yaeko's playing can be best described as soulful and passionate and her sound is rooted in a respect for diverse musical traditions as well as family ties.

This will be Yaeko's first appearance in the Journeys in Sound series since April 2016. She will be accompanied by Michael McLaughlin on accordion, Grant Smith on percussion. & Noam Tanzer on double bass http://www.yaekoplaysviolin.com/

reserve here ... https://klezmer-romamusic-yaeko.eventbrite.com/
suggested donation is $15 with a reservation, $10 for students and those on a fixed income **CASH ONLY AT DOOR**
$2 more without a reservation if space allows
e-mail journeysinsoundpresents@gmail.com to get more info