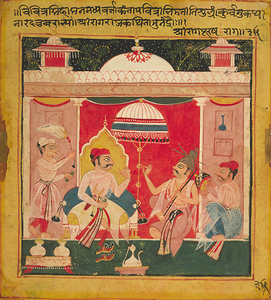 "Raga”, in its original Sanskrit, means “the act of dying or coloring”; something that colors one's emotions or moods. This is also the essence of the blues. This concert will wed the tradition of the blues with the depth of classical Indian ragas.

Ryan Lee Crosby is an American guitarist, singer-songwriter and multi-instrumentalist from Boston, Massachusetts. A versatile, exploratory musician with a restless drive to create, Crosby's unique sound is a fusion of American blues and world music influences, which he performs on 12 and 20 string guitars. In his time as an active artist, Crosby has produced 5 albums, 3 EPs and a film score, as well as having performed live across the US and around the world. Whether playing solo or leading a full band, Crosby's intricate playing, propulsive rhythms and dynamic vocals create a sound that confronts listeners with an immediacy rarely found in the work of traditional singer/songwriters.

For this performance, Ryan will be accompanied by percussionist Grant Smith and tabla player Koushik Chakrabarty.
http://www.ryanleecrosby.com/

Utsav Lal is a Delhi born pianist who has set a precedent in the world of music with his renditions of ragas on the piano. Choosing to perform on an instrument that has traditionally been considered unsuitable for Hindustani Classical Music, Utsav’s innovative handling of a raga blends his diverse musical influences and has left listeners spellbound. His soulful renditions in traditional Alap jod jhala style are expressed with simplicity, sincerity and depth and have won him fans in every corner of the world. Lal’s playing with rhythmic intelligence and unfailing clarity of technique veers from delicately decorative to dazzling moments of improvisations.

Utsav playing at a heritage site in Mumbai ...
https://www.youtube.com/watch?v=moALcnbU7BY

For this performance, Utsav will be accompanied by Derek Beckvold on tabla.
http://www.indianragapianist.com/