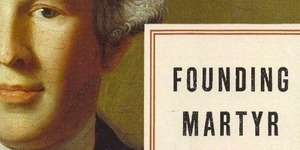 A prominent Boston physician, Dr. Joseph Warren was a key force in America’s revolutionary movement. He is responsible for setting Paul Revere on his famous ride, served in the Sons of Liberty with such leaders as John Hancock and Samuel Adams, and made the ultimate sacrifice for the cause when—although commissioned a Major General—he volunteered to fight alongside soldiers in the Battle of Bunker Hill.

The book focuses on newly discovered Warren material culture pieces, artifacts, and primary source documents. Di Spignal will deconstruct the many Warren legends and explore his resistance activities between 1765-1775.

Di Spigna graduated with a degree in history from Columbia University where he began his research on Warren 20 years ago. To immerse himself in 18th century history, Di Spigna moved to Williamsburg, Virginia, volunteered for the Colonial Williamsburg Foundation, and worked closely with many period scholars