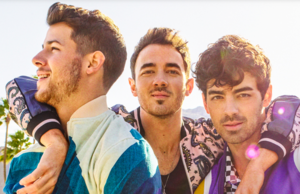 After blowing out the first round of shows on their Happiness Begins Tour, the Jonas Brothers have announced they are extending their tour through the end of 2019 with an additional 23 shows. Produced by Live Nation, the “Happiness Begins Tour Presented by American Airlines and Mastercard” is now officially the biggest Jonas Brothers tour ever, totaling 67 shows across Canada, Mexico, and the U.S.

The highly anticpated outing kicks off August 7th in Miami, FL with new dates seeing the group play through November and December in Mexico as well as added dates in the U.S. including New Orleans, Brookyln, Austin and more, before wrapping December 14th at The Forum in Los Angeles. This marks the first headline tour for the Jonas Brothers in almost a decade. The GRAMMY® nominated, multiplatinum powerhouse trio will be joined by special guests Bebe Rexha and Jordan McGraw on select dates.