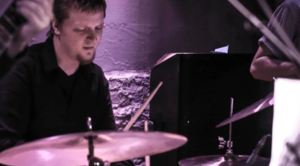 At a young age, New York based musician Jon Sheckler is proving to be a well versed musician and an up and coming band leader. As a drummer, Jon has played with some of today’s leading musicians and entertainers including trumpeter Clay Jenkins, vocalist Catherine Jensen-Hole, guitarist Al Rowe, pianist Fima Chupatkin and international recording artist Darrius Willrich. Since moving to New York in 2014, Jon has been featured at Rockwood Music Hall, Club Bonafide, Sidewalk Cafe, Williamsburg Music Center, NuBlu and ShapeShifter Lab. In 2017, the trio began its residency at Caffe Vivaldi.

His 2018 album Cityscapes has drawn critical praise across the board. All About Jazz chose two tracks from the record for Downloads of the Day. Michael Ferber called it “excellent album with a distinct sound” while singling out Jon for his “impressive and very dynamic” playing. Cityscapes was named as a top album of the month in September 2018 by Divide and Conquer while Jazz Views called the record “immediately accessible and engaging,” and Dick Metcalf gave it a perfect 5/5.

Dick Metcalf, Contemporary Fusion Reviews –
“I give Jon and his mates a MOST HIGHLY RECOMMENDED, with an EQ (energy quotient) rating of a (perfect) 5.00; which means, of course, that he also gets my PICK for best jazz trio work.”

Jamie Robash, Divide and Conquer –
“…a sprawling record full of compositions that remind one why jazz has such a permanent place in the world of music.”

Bill Buck, Soul Jazz and Funk –
“…accessible trio jazz which in places harks back to the classic soul-jazz of the 60s and elsewhere echoes the music of people like Bob James.”