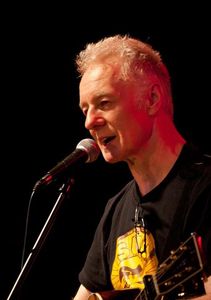 Although initially impacted as a toddler by the moods and colors of George Gershwin's "Rhapsody In Blue," Jon's ears were drawn to numerous genres and tastes, ultimately making his music perhaps a bit more eclectic than others. While his main influences are primarily basic Americana (blues, rhythm & blues, early rock & roll, pre-plastic country music, gospel, traditional, modern and post-modern folk music, and a smattering of pop), his appreciation for jazz from the early 1920s up to and including the bebop era, have had an effect in ways that aren't immediately noticed. His primary songwriting influences are common enough (Bob Dylan, Gordon Lightfoot, Percy Mayfield, Chuck Berry, Hank Williams, Sr., Tampa Red and John Hiatt to name a few) and his vocal stylings reflect Ray Charles, the early Elvis Presley, Dylan, Lightfoot, Hiatt, Levon Helm, and Stephen Stills among others.

The folk revival of the 1960s introduced Jon to ethnic folk music, urban and rural blues and the singer/songwriters who rose up out of that era, inspiring him to pick up a guitar for the first time and attempt his own songwriting. One of Jon's earliest compositions was overheard by Canadian singer/songwriter Joan Anderson. She encouraged Jon by telling him, "You stick with that, young man. You've got something there." Ms. Anderson later changed her name to Joni Mitchell and her encouragement has been a primary motivator for Jon's songwriting ever since.

Jon began performing semi-professionally in 1965 at various coffee houses in the Norfolk and Virginia Beach area while a teenaged member of the U.S. Navy. During his two years there, Jon performed and associated with Doug MacLeod, Emmylou Harris, John Pilla, Bryan Bowers, Jim Dawson and many other performers who influenced his tastes and performing style.

By 1974 Jon was living and working in the Boston area. With the help of artists like Robin Batteau, Ric Ocasek & Ben Orr of The Cars, and Andy Pratt, Jon began recording demos in the hopes of landing a solo recording contract. Instead, his songwriting abilities caught the ear of United Artists who signed him as a staff songwriter in 1977 where he achieved limited success.

Tired of being chained to the commercial disciplines of a major publishing company, Jon formed a band called the Doubles with lead guitarist George Pratt in 1979. By 1982 the band had run its course and McAuliffe and Pratt locked themselves in various Boston area recording studios for four years where they recorded whatever suited their fancy. A CD of this work was issued in 2007 entitled "Rubber Room Rejects."

Jon's creative explosion reached a peak by 1987. Exhausted and somewhat uninspired by changes in the music industry, Jon pulled back from his efforts for 6 years to study American Music History, venturing out only occasionally to perform Gospel music. By 2007 a request to return to local stages in the Northeast resulted in greater response than he'd ever known previously, which in turn inspired a raft of new songs.

Jon released his first solo album, "In This Present Form," in late spring, 2011. Produced by multi-instrumentalist Seth Connelly, the album echoed most of his musical influences and personal beliefs and was greeted with very positive response and the wide support and encouragement of audiences throughout the Northeast. In 2012 Jon began working with another multi-instrumentalist, Jeff Root. Their collaboration has resulted in Jon's latest CD, "Old School Moderne," currently being mixed and prepared for release on October 30th.

Reddit
04/03/2017 20:00:00 04/03/2017 22:30:00 America/New_York Jon & Patti McAuliffe and Cooper & Kenneally in Concert Although initially impacted as a toddler by the moods and colors of George Gershwin's "Rhapsody In Blue," Jon's ears were drawn to numerous genres and tastes, ultimately making his music perhaps a ... Dedham Square Coffeehouse, Dedham, MA 02026 false DD/MM/YYYY