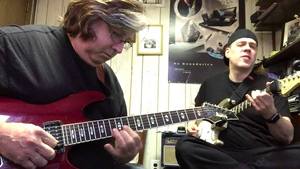 When: Saturday October 21, 2017 from 7:30 - 10:00 p.m.
Who: Jon Finn, and Steve Marchena
What: Fundraiser for Saint Vincent DePaul Society SSP, Part 3 of 3!
Presented by The Good Art Series.
Jon Finn with Steve Marchena and Friends!
Jon Finn and Steve Marchena will be united on stage. Jon is the principle guitarist of the Boston POPS and performs regularly with the BSO, when they need a guitarist! Steve Marchena who has recently been endorsed by Ortega Guitars, has been performing all styles of guitar and has been performing for crowds at some of the most significant theater halls in Boston and beyond.
Where: Saint Susanna Parish (262 Needham Street, Dedham, MA)
Cost: Advanced Purchase: 20.00 USD per ticket
Buy Advance Tickets at: https://www.eventbrite.com/e/jon-finn-and-steve-marchena-at-saint-susanna-tickets-32470160123