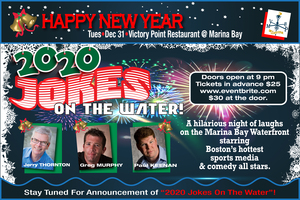 Jokes on the Water New Year's Eve All-Star Comedy show at the beautiful new Victory Room at Victory Point promises to be one of the region's most entertaining ways to bid 2019 adieu and greet 2020.

Jokes on the Water debuted in September with a sold-out, standing-room-only show and a hilarious night of laughs. It has grown into monthly sold-out series. The New Year's Eve All-Star Show should be the biggest, funniest night yet.

Football fans have read and loved Thornton for years on Barstool Sports and watched him on HBO. Thornton is the Patriots superfan, NFL commentator and author who "defended the wall" of Tom Brady's honor against evil Roger Goodell and the NFL.

Headline performer Keenan is best described as a 12-year-old boy trapped in a 6-foot-4-inch adult body. He has become a regular in the talent-rich Boston comedy scene. Keenan won the first annual Plymouth Rock Comedy Fest in 2010 and has also been a finalist in the Magner's Comedy Festival, Sierra Mist Comedy Search in Boston, HBO Standup Standoff, Catch a Rising Star contest and the Rhode Island Comedy Festival. He was also a semifinalist in the Great Canadian Laugh Off international comedy competition.

Doors for Jokes on the Water New Year's Eve All-Star Comedy Show open at 9 p.m. and the show starts at 10 p.m. But guests are invited to arrive early and enjoy dinner before the show in Victory Point's main watefront dining room. A limited menu will be avaialble during the show.

Jokes on the Water will soon announce its slate of monthly shows for the 2020 season, starting on January 18 with Thornton, Jimmy Dunn and Mike Whitman.