Johnny Redcoat to GI Joe: From Boston to Berlin to Baghdad 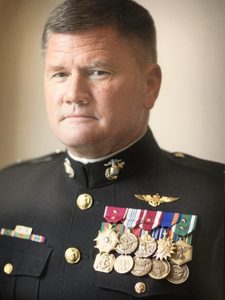 Join Colonel Earl “The Pearl” Wederbrook, USMC (Ret) on a short trip through time to compare and contrast the occupation of Boston in 1776 with Berlin in 1945 and Baghdad in 2004. Col. Wederbrook will discuss and analyze the military, political, economic, social and moral aspects and consequences of using the military to quell civil unrest, occupy conquered territory or aid in nation building.

Afterwards, join us for a reception and Community Conversation with Col. Wederbrook, a representative of the Office of Veterans Services, and several veterans from post-9/11 deployments for an intimate discussion on what it’s like being the “occupier” in a foreign land and how to adapt to civilian life upon return home.

Col. Earl “The Pearl” Wederbrook manages Raytheon corporate field operations and business development in San Diego, CA. Before joining Raytheon in 2006, Pearl retired as a Colonel after a successful thirty-year career as a Marine Fighter Pilot with significant operational experience including combat missions in Iraq. Earl’s experience in military strategic planning, force employment, and international relations led him to serve on the Joint Staff for the Chairman of the Joint Chiefs of Staff under President George W. Bush during Operation Iraqi Freedom and Operation Enduring Freedom from 2000-2003. He earned a BS in Aeronautics, an MA in Business Management and Human Resources, an MA in International Relations from the US Army War College, and an MA in Aerospace Sciences. Earl is a member of the Board of Directors for the San Diego Military Advisory Council and a member of the National Board of Directors for the Marine Corps Aviation Association.