Johnny A: Just Me and My Guitars 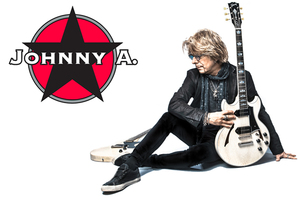 We’re bringing a big stage and awesome sound (of course) to the back parking lot at the see details).

Don\’t miss your only chance to see Grammy Nominated, Boston Music Hall of Fame Inductee, and one of America\’s finest instrumental guitarists, Johnny A. LIVE ON-STAGE at the most spectacular outdoor venue on Boston\’s North Shore!

Lots of folks throw around the phrase \”let the music do the talking,\” but only a few have the fortitude to really do it – to just go out there and play, shunning flash, shrugging off image and reeling in the listener on the strength of the songs alone.

Johnny A. is that kind of performer. For the better part of three decades, The Massachusetts-based guitarist and bandleader has proven himself capable of generating heat at venues from working-class bars to international amphitheaters – and every sort of venue in between. And when the house lights are turned up, he\’s just as adept at captivating serious students of the six-string with a virtuosity that earned him the rare honor of having his name placed on a signature Gibson guitar.

Never content with complacency, and always up for a challenge, Johnny again takes an adventurous musical left turn with his \”Just Me…And My Guitars\” performances to present his distinct, instrumental guitar approach for the very first time in a completely \”solo\” intimate atmosphere…combining his keen arrangement instincts and guitar skills with his adept understanding and use of effects for a high–wire, one-man tour de force, performance in real-time without a net!