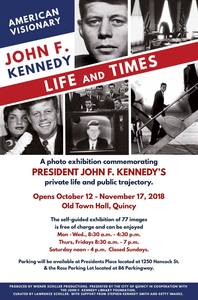 One of the most extensively researched collections of Kennedy photos ever assembled, the exhibition brings together images from the John F. Kennedy Presidential Library & Museum, the John F. Kennedy Library Foundation, Getty Images, private collections, and the Kennedy family archives that capture public and private moments from the Kennedys’ life. Some of the photos on display are iconic; others have never before been published.
“It is an honor for our City of Presidents to welcome such a remarkable collection of images of this iconic president and family deeply rooted in our local area history,” shared Mayor Thomas P. Koch.

Kennedy’s administration coincided with a golden age of photojournalism in America. No single politician was photographed more than Kennedy – from his first congressional bid as a decorated war hero in 1946, to his fairy-tale wedding to Jacqueline Bouvier in 1953, to his run for the White House in 1960 and the tragedy of his death in Dallas in 1963. Documentary photographers such as Ed Clark, Lisl Steiner, Ralph Crane, Philippe Halsman, Ted Spiegel, Jacques Lowe, Lawrence Schiller, Steve Schapiro, and Sam Vestal captured the optimism and challenges of the early 1960s in some of the finest and most vivid images of the period. The exhibition was recently on display at the Smithsonian American Art Museum in Washington, D.C. and will travel extensively across the U.S. in the coming years.

“John F. Kennedy is still seen as a symbol around the world, representing and espousing the best and most universal elements of the American character,” said Stephen Kennedy Smith, Kennedy’s nephew. “It is our hope that the compelling images of President Kennedy’s life and work on view in this exhibit will remind visitors not only of the values that defined his presidency, but also will introduce him to new audiences and future leaders.”