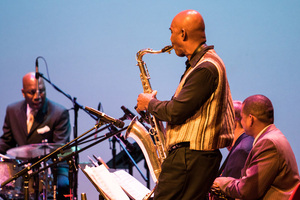 Celebrating its 40th year, the John Coltrane Memorial Concert (JCMC) presents the time-honored JCMC Ensemble, this year expanding to 20-pieces under the direction of Carl Atkins. Joining Atkins on reeds and woodwinds will be Leonard Brown, Stan Strickland, Bill Thompson and Robert Tynes. Trumpets will feature Robert Gallegos, Charles Lewis, Doug Olsen and Mike Peipman. Jeff Galindo, Bill Lowe, Rick Stepton and Gary Valente will be featured on trombone and tuba, along with Yoron Israel and Ron Savage on drums. Rollins Ross, George W. Russell, Jr., Frank Wilkins are the keyboardists, and John Lockwood and Ron Mahdi are the bassists. "Con Salsa!"'s José Massó serves as host for the evening.

The John Coltrane Memorial Concert (JCMC) is the world’s oldest annual performance tribute to the musical and spiritual legacy of the great master. JCMC believes, as did ‘Trane, that music can be a force to make the world a better place:

“I want to be a force for real good. In other words, I know there are bad forces out here that bring suffering to others and misery to the world, but I want to be the opposite force. I want to be the force that is truly for good.” (John Coltrane, 1966)

For this banner year, which happens to coincide with the 50th anniversary year of Coltrane’s death (d. July 17, 1967), JCMC has scheduled a week-long series of events, combined with a month-long photo exhibit, providing insight into the many ways to really hear and view 'Trane, who harbored such a strong belief that the power of his music could affect positive social change. It is a week to jump on board the ‘Trane phenomenon.