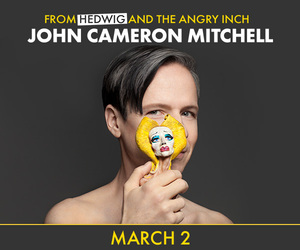 Get discounted tickets with this link, while available:

John Cameron Mitchell, the double Tony Award winning, Golden Globe-nominated co-creator of Hedwig & the Angry Inch, brings songs and stories from his ground-breaking history in a big, brash and bold rock spectacle, performing songs from his groundbreaking rock musical and regaling audiences with stories from 20 years of Hedwig. He will also preview songs from his upcoming musical podcast Anthem starring himself, Glenn Close, Patti Lupone, Cynthia Erivo, Denis O'Hare, Laurie Anderson, and Marion Cotillard. So put on some make-up, turn up the eight-track and pull the wig down from the shelf – for a night of post-punk, neo-glam rock – a collective quest for love, hope and identity.