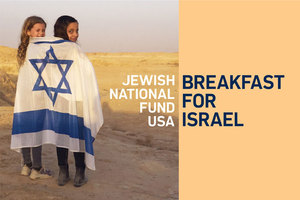 Description:
Join us for an engaging, impactful, and informative virtual Breakfast for Israel! Gather together with your community members to hear how your local efforts ensure a bright, prosperous future for the land and people of Israel. Then join Jewish National Fund-USA supporters from coast to coast in a vibrant celebration of Yom Ha’atzmaut.

Tsahi Halevi is a musician, singer, creator, and actor known for playing Naor on the popular Israeli Netflix series Fauda. Halevi also reached the finals in the first season of The Voice Israel. He released his debut album, “Directions,” which is regularly featured on local radio.

Rona-Lee Shimon is an actress best known for her role as Nurit in the Israeli Netflix series Fauda. She also has extensive experience in Israeli theater, having performed the roles of Velma Kelly in Chicago, Anita in West Side Story, and Sally Bowles in Cabaret.

The conversation will be moderated by Yoav Limor, who is a veteran military correspondent that has been covering the Middle East conflict for the last 33 years. Limor is the host of a morning show on Israel’s Channel 2 Keshet, a defense commentator for Israel Hayom daily newspaper, and a regular contributor on i24 News.

For more information and to register www.jnf.org/bfi
Questions? Contact Sara Hefez, Executive Director, New England and the Capital District at 617-423-0999 x811 or SHefez@jnf.org