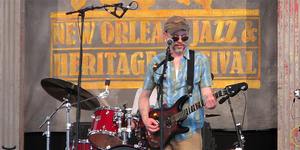 Drawing inspiration from his life as a blues-singing French Quarter street musician in the 1990s, Boston's Jeremy Lyons has established himself as a quiet force on the Boston music scene. Fronting Vapors of Morphine, The Busted Jug Band and Jeremy Lyons Trio.

Proponent of unusual music and musical instruments (traditional and otherwise), and general entertainer. He plays in - and plays with - American music traditions. Lyons was fascinated by the concept of home-grown music from an early age. Studies in ethnomusicology and American social history were tempered by a dozen years of making a living playing in the streets and clubs of New Orleans. That was his home from the early '90s, till circumstances in August, 2005 (the disastrous flooding associated with Hurricane Katrina) drove him North. Jeremy began the slow process of recreating himself, musically and otherwise. Fortunately he and his family found help in a welcoming community in Massachusetts.