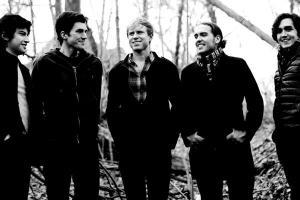 There’s a vicious divide between the worlds of classical violin and traditional fiddling. It’s a rift as deep as the PC vs Mac debate, as polarizing as red state vs blue state, and no amount of charming cameos from Yo Yo Ma has been able to heal this wound. That’s why it’s so rare and remarkable to find a young fiddler like Jeremy Kittel who is able to move effortlessly between the classical and folk worlds. Whereas the classical violinist has the impeccable tone and the ability to play into the higher reaches of the violin, the folk fiddler has the rhythmic sense, the drive, the swing, the groove, that’s usually missing from classical music.
Of course, any musician that can unite these two worlds would be near unstoppable, and that’s exactly what we find in Kittel’s music. He blazes through a Bach violin partita as easily as a Scottish reel, bringing the same intense focus and precision to both, but also a wily kind of rhythm to the Bach partita that probably would have been wholly appropriate for Bach’s time. Kittel also has a larger sense of composition and creation that comes from his work in classical and jazz violin worlds. Many young fiddlers today compose their own tunes, but Kittel arranges them into something larger, integrating the fiery musicianship of his band into the pieces.
And what a band! The Jeremy Kittel Band features groundbreaking hammered dulcimer player Simon Chrisman, Canadian wunderkind guitarist Quinn Bachand, mandolin prodigy Joshua Pinkham, and transcendent cellist Nathaniel Smith. Kittel’s working on a new album in 2017 with this ensemble, and advance videos from the studio show a band operating at the top of their form, each member listening intuitively, and the whole ensemble turning on a dime at Kittel’s direction. The music Kittel is making now has all the precision and virtuosity of the best classical players, but the wonderfully devilish, explosive drive of the best stringbands."
-Devon Leger, Hearth Music

"The Jeremy Kittel Band is phenomenal. Every player is virtuosic. That is not what is remarkable about the band however. What is remarkable is all of that virtuosity is put to work in the service of beautiful, intricate, compelling arrangements making music the master, not the other way around. This is rare and wonderful. This is music using the pinnacle as the starting point. The theme of Wintergrass 2017 was Bach to Bluegrass. There were spectacular bands from both ends of the continuum. The Jeremy Kittel Band transcended that continuum, however, presenting music that both J.S. Bach and Bill Monroe would understand and appreciate. They’d probably both buy a cd and sign the mailing list, too.” - Wintergrass Music Festival

"I was entertained, mesmerized, and moved by the sound that leapt off of the stage… from a delicate jig to a celtic reel to a Bach Partita to a contemporary original acoustic composition… arrangements that were flawless, artful, and compelling... I would go out of my way to hear this outfit again!” - Mark Schatz (Nickel Creek, Bela Fleck, Claire Lynch, John Hartford)

“...We were totally mesmerized by their set. Definitely one of my favorite acts we've been able to see on the road. We were blown away… we would jump at the opportunity to share the stage with them again.” - Dave Senft, Darlingside