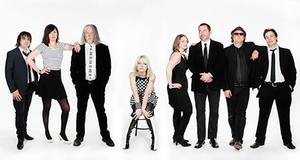 Boston music fans will recognize 2010 Boston Music Awards Female Vocalist of the Year Jen D’Angora (aka Jenny Dee) as the singer/guitarist in The Downbeat 5 and The Dents. That same year, D’Angora started working on a new batch of songs and indulge in her love of the girl group sounds of the 60′s. The Deelinquents formed soon thereafter, with members of Papas Fritas, The Gravel Pit, and Schnockered.

“There isn’t a music on earth that better suits D’Angora’s voice than girl-group-era R&B, straight-up, and that’s what she’s singing here — with bonus points for writing songs that hold their own next to the classics. (There’s a Daptone-like quality to her recordings that makes you do audio double-takes: are you sure this s%&t wasn’t recorded in 1964?).” — Boston Phoenix

After spending a couple of years mining the Brill Building sounds of the 60’s, Dee and company decided to shift gears a bit and fast forward to the late 1970’s, reacquainting herself with how she discovered the girl groups in the first place: Blondie and the New York Dolls. The band’s new sound is reminiscent of both of those things, while favoring fuzzy guitars and a less retro production value.

"This is one of the highest compliments I can give--it's the Blondie album I've been waiting for since 1981. Just tremendous, yet not a nostalgia trip." - Steve Reynolds - Premier Radio Network, NY, NY

On “Electric Candyland,” Dee and her misfits bat their lashes like a ’50s girl group (“That Moon Was Low”), joyride through American new wave (“Getaway”) and strut with Nancy Sinatra pop in go-go boots (“Livin’ Alone”). And there’s so much more — bubblegum punk, sock-hop soul, surf riffs — all handled expertly by producer Ed Valauskas and a big band (horns! harmonies!). – Boston Herald

Electric Candyland features 8 original songs penned by Dee and two covers by The Sweet and Graham Parker (the latter given to Dee by Parker himself to record).


"Plain and simple, Jenny Dee is one of the best singers out there." -- FasterandLouder.com

Hailing from South Boston, Andrea Gillis is the real deal - a Northeast legend of rock, soul, jazz and blues. "She has been blessed with the pipes of Etta James and with the boozy swagger of Jim Morrison." - The Boston Globe

Andrea Gillis first crashed onto the local music scene with the band Red Chord. Their live shows are legendary, and still have people talking. She then wowed fans and critics alike with the release of her solo cd ”Want Another” produced by Ed Valauskas . A virtual who’s who of Boston rock is on that record.The Boston Globe says “She has been blessed with the pipes of Etta James and with the boozy swagger of Jim Morrison”. Gillis blends r&b, rock, pop and gospel.

Andrea Gillis is a powerhouse singer who has been a staple of the Boston music scene for years, performing in such bands as Andrea Gillis Band, Other Girls, Red Chord, The Rudds. She's got the lungs of Tina Turner, the songwriting chops of Chrissie Hynde and the swagger of Mick Jagger. Her band has opened for Sharon Jones, Lee Fields, J. Geils, and more. She's performed the national anthem at historic Fenway Park before a Red Sox game, and is one of the original performers on the popular Tweed River Music Festival in Vermont.