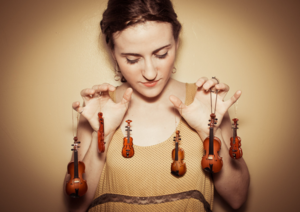 Too often artists view tradition as a towering monolith to be either conquered or cowed by, by young Scottish fiddler and experimentalist Jenna Moynihan knows that tradition is meant to be a starting point for great inspiration, not a wall.

On her new album, Woven, she darts back and forth like the shuttle in a loom, pulling the many strands of the Scottish fiddle tradition into a colorful tapestry that showcases her virtuosic control of her instrument as much as her deep sense of playfulness. To help her create this work, she’s brought together some of the best young traditional artists in her hometown of Boston, one of today’s hotbeds for new traditional music. The lineup here includes cutting-edge Scottish harpist Mairi Chaimbeul, renowned bluegrass guitarist Courtney Hartman (Della Mae), New England Celtic guitarist Owen Marshall, plus all-star guest fiddlers: Duncan Wickel, Darol Anger, and Alex Hargreaves. It’s easy to tell that the music on her new album stems from what must have been many late-night jam sessions with these friends, but the ease of companionship found on this album belies the complexity of Moynihan’s arrangements. As the harp rolls in counterpoint behind the racing fiddle lines, or as the guitar matches her beat for beat, this is music whose virtuosity lies in Moynihan’s construction of the atmosphere around each tune, and her delivery of each beautiful melody.

Jenna is from Lakewood, New York and is a recent graduate of Berklee College of Music. While studying, she was selected to receive the Fletcher Bright Award & and The American Roots Music – two awards given annually to one outstanding string player. She performs in a duo with Scottish harpist, Mairi Chaimbeul, with Laura Cortese & The Dance Cards, Darol Anger & The Furies, and has performed & collaborated with Old Blind Dogs, Hamish Napier, Bruce Molsky, Matt Glaser, Kimberely Fraser, Phil Cunningham, and as a soloist at Symphony Hall with the Boston Pops.

16/03/2018 20:00:00 16/03/2018 22:00:00 15 Jenna Moynihan & Friends; with Katie McNally, Galen Fraser, Yann Falquet and more Too often artists view tradition as a towering monolith to be either conquered or cowed by, by young Scottish fiddler and experimentalist Jenna Moynihan knows that tradition is meant to be a starti... Club Passim, Cambridge, MA 02138 Organizer Organizer e-mail false DD/MM/YYYY Reddit