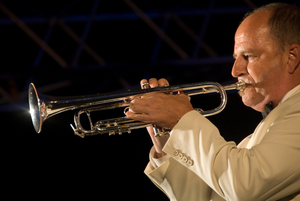 Where:
https://chelmsfordarts.org/may-4th-jay-daly-trumpet-with-the-chelmsford-jazz-ensemble/ Chelmsford Center for the Arts
1A North Road
Chelmsford, MA 01824

The Chelmsford Community Jazz Ensemble is thrilled to feature the great trumpeter Jay Daly in this concert presenting five decades of popular trumpet solos. Daly pays tribute to the great masters who were widely recognized as pop artists of their time, including Bunny Berigan, Harry James, Al Hirt, Herb Alpert, and, of course, Louis Armstrong. All of them changed and influenced the American pop culture and are featured in this program, which will also highlight the premieres of two commissioned charts from Daly himself and from ensemble director Arthur Bakopolus.

The music will start at 7:30pm on Saturday, May 4th, at the Chelmsford Center for the Arts. Tickets are $15 for general admission, or $10 for members/students/seniors, and can be acquired on https://www.brownpapertickets.com/ (search for Jay Daly) or at the CCA box office.

The Chelmsford Community Band was founded in 1972 and is a volunteer group of adult musicians who greatly enjoy bringing live music to the greater Chelmsford area. The concert band and jazz ensemble each play several concerts throughout the year including weekly appearances on Chelmsford Common every summer. Look for them online at www.chelmsfordcommunityband.com, on Facebook at facebook.com/ChelmsfordCommunityBand, on Twitter as @ChelmsfordBand, and on Instagram as @ChelmsfordCommunityBand.