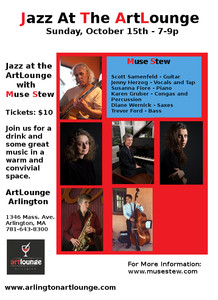 Muse Stew will be performing at the Arlington ArtLounge on Sunday, October 15th from 7-9p. The band is led by guitarist and Arlington resident Scott Samenfeld. The concert will showcase 2 new members, vocalist Jenny Herzog (also an Arlington resident) and bassist Trevor Ford. The group is rounded out by saxophonist Diane Wernick and long-time members Karen Gruber on congas and percussion, and Susanna Fiore on piano.

In addition to being a vocalist, Jenny Herzog dances tap and the group will be encorporating tap into the program. From her bio:

“I am a classically trained, jazz-loving tap dancer, vocalist, and improvisational musician based in Boston. I grew up on the Great American Songbook, musical theater, Thelonious Monk, and the Nicholas Brothers.

I believe that the voice and body are intertwined; voice informs body informs voice.
I spent my undergraduate years studying philosophy at Vassar College, then at the Gallatin School of Individualized Study at NYU. There, I created the major, "Navigating Chaos and Structure: In Pursuit of Freedom and Art." In New York, I studied tap dance with Lynn Schwab, Barbara Duffy, Brenda Bufalino, and Heather Cornell. I recently graduated with my Masters in Contemporary Improvisation from the New England Conservatory, where I studied voice with Hankus Netsky, Karen Holvik, Joe Morris, Linda Chase, and Bob Moses.”
Trevor Ford recently moved to Boston from Denver where he graduated from the University of Denver where he studied jazz bass with the great bassist, Ken Walker. Trevor has been studying and playing music throughout his school years. He moved from cello and violin to bass in high school.
Diane Wernick is also relatively new to the group having joined us this past Spring. Diane is a Berklee Faculty member and a long-time teacher of the John Payne Music Center.
Pianist Susanna Fiore has been a member of Muse Stew since 1998 and is a member of the Faculty at the Powers Music School in Belmont.
Percussionist Karen Gruber has been a member of the group since its inception in 1990. She is an Arlington resident.
Band leader and guitarist Scott Samenfeld created the group in 1990. The group has 2 CDs; “Crossings” (1996) and “Live at the Zeitgeist Galler” (2004). Muse stew performs original compositions by Samenfeld written over the past 4 decades. It also plays a wide repertoire of jazz standards, Brzilian and Latin Jazz tunes.
The Arlington ArtLounge is located at 1346 Mass. Ave. in Arlington Heights. For tickets and information: http://www.arlingtonartlounge.com