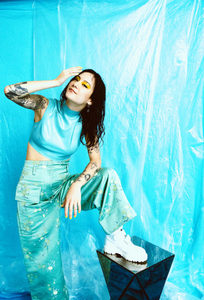 A solo moniker for Philadelphia musician Michelle Zauner, Japanese Breakfast began as a month-long, song-a-day writing challenge during a break from her indie rock band Little Big League. The result was 2013's June, an intimate set of melodic, electric guitar-accompanied lo-fi tunes issued on cassette by Ranch Records. She continued to write solo and with her band, with Japanese Breakfast's self-released Where Is My Great Big Feeling? and the Seagreen Records cassette American Sound both following in the summer of 2014 before Little Big League's Tropical Jinx arrived that October. With a varied palette including markedly bigger, synth-boosted sounds that bridged lo-fi and indie pop, Japanese Breakfast's Yellow K Records debut, Psychopomp, was released in the spring of 2016. The album dealt with the emotional fallout of her mother's death, and was, in Zauner's mind, the one and only Japanese Breakfast record. She soon changed her mind, signed with Dead Oceans (which re-released Psychopomp to a wider audience), and began work on another album with the help of producer Craig Hendrix, who had also helmed Little Big League's debut album. The pair played the bulk of the instruments on the album and went for a much bigger sound, taking the project out of the bedroom and into a much bigger space. An expansive mix from indie pop alchemist Jorge Elbrecht made it sound even larger as Zauner delved into themes like grief, dead pop stars, outer space, and moving on. Soft Sounds from Another Planet was released by Dead Oceans in July of 2017.