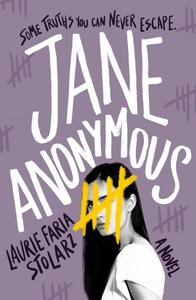 Bestselling author Laurie Faria Stolarz returns with Jane Anonymous, a gripping tale of a seventeen-year-old girl’s kidnapping and her struggle to fit back into her life after she escapes. Laurie will be in conversation with YA author, Rebecca Podos.

Then, “Jane” was just your typical 17-year-old in a typical New England suburb getting ready to start her senior year. She had a part-time job she enjoyed, an awesome best friend, overbearing but loving parents, and a crush on a boy who was taking her to see her favorite band. She never would’ve imagined that in her town where nothing ever happens, a series of small coincidences would lead to a devastating turn of events that would forever change her life.

Laurie Faria Stolarz is the author of several popular young adult novels including the Dark House series, the Touch series, Project 17, Shutter, and Bleed, as well as the bestselling Blue is for Nightmares series. With over a million books sold worldwide, Stolarz’s titles have been translated into thirty languages, been named on numerous award lists, including the Quick Pick for Reluctant Readers list and the Top Ten Teen Pick list, both through the American Library Association, and have been optioned for TV.

Rebecca Podos' debut novel, The Mystery of Hollow Places, was a Junior Library Guild Selection and a B&N Best YA Book of 2016. Her second book, Like Water, won the 2018 Lambda Literary Award for LGBTQ Children's and Young Adult. The Wise and the Wicked, her third novel, was recently released.

A graduate of the Writing, Literature and Publishing Program at Emerson College, Rebecca's fiction has been published in journals like Glimmer Train, Paper Darts, and Smokelong Quarterly. By day, she works as a YA and MG agent at the Rees Literary Agency in Boston.