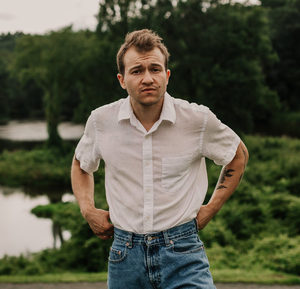 Izzy Heltai is a folk singer and songwriter based in Northampton, Massachusetts. He has been described as possessing “a voice that is equal parts gruff, sandpapered scratches, unfiltered and open just enough to let the story out and smooth, honeyed flavor that eases you in” (Red Line Roots).

As a songwriter, he focuses on telling stories about love, loss, and growth – crafting songs both relatable to his inter-generational audience and specific to his experiences and proclivities as a young folk artist. Izzy’s music is influenced by folk legends like Carole King, Paul Simon, and Dave Van Ronk, as well as leading voices in the contemporary folk resurgence like Gregory Alan Isakov, Brandi Carlile, and Jason Isbell. In the summer of 2017, Izzy was a finalist at Falcon Ridge Folk Festival’s Grassy Hill Emerging Artist Showcase in Hillsdale, NY, and in 2018 he was named a New Folk Finalist at Kerrville Folk Festival in Kerrville, TX. He has performed at Mass MoCa’s acclaimed Freshgrass Folk Festival for two years running, and his debut EP release in January of 2018 was accompanied by a sold-out release show at the historic Club Passim in Cambridge, MA.