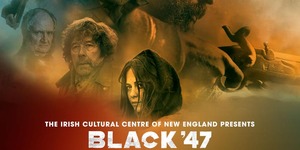 The ICC will have an exclusive screening of Black 47 on November 11th at 5pm. Black 47 is a thrilling drama set during the famine era. "One man’s ruthless pursuit of justice plays out against the darkest chapter of Irish history (Irish Famine) in this riveting revenge thriller".

See the hit Irish film that critics have said “deserves its spot among the memorable films of 2018" (RTÉ) and that has been called “an admirable attempt to go where no one has gone before” (Irish Independent).

Join us for a pre-show open Irish music sesssion!