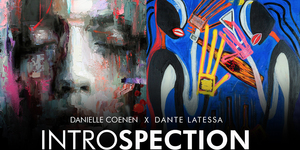 DANTE LATESSA
Brookline artist Dante Latessa has rapidly gained worldwide recognition with his work that is perhaps most clearly defined by its raw, primitive and deeply textural nature and the emotionally evocative effect it produces in the viewer, regardless of the content being depicted. In addition to his wide-ranging stylistic influences, one of the most prominent and recurring themes in Dante's work is the role his family and close friends have played in his life. Although Dante has no formal training as an artist, he has sold out two major shows, one in Los Angeles and one in his hometown of Boston. At the age of 19, he is the youngest artist ever to headline a gallery at Scope and his work is exhibited in numerous significant private collect ions around the world.

DANIELLE COENEN
Danielle Coenen is a Boston-based painter who creates portraits characterized by saturated palettes and merging of realism with expressive abstraction. She received a BFA from The Art Institute of Boston at Lesley University in 2011, trained in both figure painting and sculpture. While primarily working with oils, her paintings often incorporate other mediums such as spray paint, pastel, and silly string. Danielle has had solo exhibitions in both Boston and New York City, most recently at Wook + Lattuada Gallery, with other notable including multiple juried exhibitions in Boston and an invitational at the Attleboro Arts Museum in 2016. Along with working out of her studio in Dedham, Danielle also currently teaches art at the precollege level and has received national recognition as an educator.