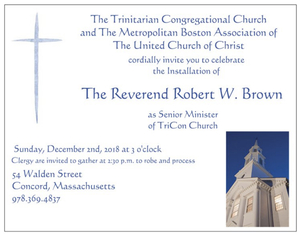 The Trinitarian Congregational Church and the Metropolitan Boston Association of the United Church of Christ cordially invite the public to celebrate the Installation of The Reverend Robert W. Brown as the Senior Minister of Trinitarian Congregational Church of Concord, MA on Sunday, December 2, 2018 at 3:00pm at 54 Walden St, Concord, MA 01742. Clergy are invited to gather at 2:30pm to robe and process. A reception with refreshments will be held afterward. All are welcome to attend.

Rev. Brown grew up in the woods of Maine and New Hampshire. He left for the big city lights of Boston to attend Emerson College and graduated in 1980 with a dual degree in Mass Communications and Business and Industrial Communications. For the next 25 years he was a film and television director in Boston, New York and Los Angeles, working in local and network television, advertising, corporate films and independent documentaries. In 2005 he began to transition from film making to ministry.

During his seminary years he served as an intern minister at Old South Church in Boston, a seminarian at South Acton Congregational Church, was an active member of Hope Church in Jamaica Plain, and a student Chaplain at Brigham and Women’s Hospital. He also worked full time at a group home for developmentally disabled adults in Watertown and Brookline. Bob holds two B.S. degrees in Communications from Emerson College in Boston and a Masters of Divinity with honors degree from Andover Newton Theological Seminary. He joined TriCon church in 2009 as the Interim Associate Minister, and was ordained into ministry at TriCon Church in Concord, MA by the Metropolitan Boston Association of the United Church of Christ in 2010. Since 2009 Rev. Brown has been working with the middle and high school youth groups. Bob also creates opportunities for individuals and small groups at TriCon to grow deeper in the Christian life and faith.

In his spare time...Bob is a proud father to three adult children, two adult stepsons, a son-in-law and daughter-in-law. He finds great joy when spending time with his two and a half year old grandson, Blake. The entire family lives in the area and frequently gathers together. Bob and his wife, Natalie Gardner, have enjoyed renovating their mid-century ranch in Maynard. Together they love to hike, bike and paddle through the beautiful New England landscape as Bob takes photographs. Bob also craves spiritual retreats expressly for extended periods of silence, solitude and centering down in the presence of God. In 2014, during his sabbatical, Bob and Natalie walked El Camino De Santiago, El Norte, a 500-mile pilgrimage along the Spanish coast.

"To be a Christian, one who follows Christ, is to have a life filled with dynamic adventure and extravagant possibilities. I find that our faith, individually and corporately, is critically relevant, continually engaging and deeply joyful. My faith journey has led me to be compelled to humbly serve God and the people of God, to help create and point to the sacred space that is continually manifest here and now, revealing the presence of God through nature, relationships, Scripture and the Gospel of Jesus Christ", say Rev. Bob Brown.

Trinitarian Congregational (TriCon) Church, located at 54 Walden Street, Concord, MA 01742, is a vibrant ecumenical community of faith in the tradition of the United Church of Christ and is deeply involved in youth ministry, mission & outreach, and social justice. TriCon is an inclusive, open, affirming and welcoming congregation.