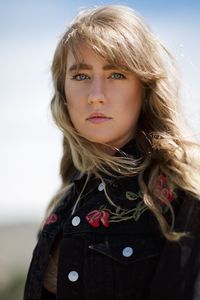 Gifted with a head-turning voice, effortless beauty and a drive for unflinching authenticity, Ingrid Elizabeth is a country singer-songwriter who splits time between Nashville and Los Angeles.

With the release of her debut single, “The Stranger,” the Colorado native follows in the footsteps of country’s boldest truth tellers. Raised on the road, Andress and her family moved frequently from town to town as they followed her father’s career as a strength and conditioning coach in Major League Baseball, which gave her plenty of time to play piano and write about the ever-changing view out her window. She grew up on a wide range of music, captivated by vocalists from Whitney Houston to Sarah McLachlan and Robert Plant. But it was the country sensibilities of Joni Mitchell, Faith Hill, the Dixie Chicks, and even John Denver that stole her heart, and fired her imagination. As a result, her country songs are unguarded, raw and inclusive, focused on a gutsy-but-vulnerable voice and the feelings pulled deep from within her wanderer’s soul.

Mentored by her teacher – superstar songwriter and former American Idol judge Kara DioGuardi – Andress’ songwriting blossomed through her time at Berklee College of Music. Moving easily between genres, she’s scored pop hits like Vice’s “Steady 1234” and placed the anthemic EDM single “LMK” with her Virgos side project on Season 6 of MTV’s Teen Wolf, in addition to co-writing with R&B star Akon and earning single cuts with electropop icon Charli XCX.

With the aching romance of her first single, “The Stranger,” Andress has planted a flag for a deeplypersonal kind of artistry. It’s just the first taste of Andress’ bold vision for country’s future, which as it turns out, is also a throwback to the past – one where real-life stories and voices trump buzzwords and image.