Increasing Housing Affordability in Boston: Why it Matters to Us All 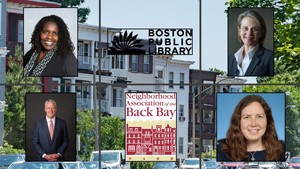 Please join us for a citywide Zoom forum produced by the Neighborhood Association of the Back Bay (NABB) Homelessness Task Force (HTF) about how to address the high cost of housing, which has been further exacerbated by the on-going COVID-19 pandemic.

To attend, please register at the following link: https://bit.ly/HousingBPLNABB.

Panelists will include the following City of Boston civic and business leaders:

The high cost of housing is the number one concern of Boston citizens according to citywide polls. Boston’s older adults, families, and workforce are increasingly burdened by lack of affordability to live in or near the city. The pandemic has exacerbated the problem for many of Boston’s citizens and businesses. At the same time, it has provided new insights to help re-envision a more stable housing situation in our city and state.

Boston’s civic and business leaders will outline Boston’s affordable housing needs, the high cost of not addressing the problem, and exciting new plans to increase housing access and affordability. We hope that you will join this meeting to learn how we can all play a role in making our city a vibrant world class leader in affordable housing.

More about the panelists:

Thomas N. O'Brien
He is the Founding Partner and CEO of The HYM Investment Group, LLC. HYM is currently leading the development of over twenty (20) million square feet of mixed-use development in Greater Boston, including the following notable and complex projects: Bulfinch Crossing (the redevelopment of the Government Center Garage), Suffolk Downs and Welltower’s Balfour at Brookline. Prior to HYM, O'Brien served as a Managing Partner for JPI, a national developer and owner of multifamily communities, and as a Managing Director in Boston and New York for Tishman Speyer, one of the world’s leading real estate firms. O'Brien also led the Boston Redevelopment Authority as its Director and Chief of Staff, overseeing the development of over 12 million Square Feet of projects in Boston, from 1994 to 2000. O'Brien has served as Chairman of The Greater Boston Real Estate Board and is Vice Chair of the Board of Overseers of The Anti-Defamation League of New England, which awarded O’Brien its Abraham Joshua Heschel Interfaith Relations Award in 2016. In 2011, Governor Deval Patrick appointed O’Brien to the Board of the Massachusetts Housing Finance Agency. In 2016, Mayor Martin J. Walsh appointed O’Brien to the Board of Trustees of the Rose F. Kennedy Greenway Conservancy and he also serves as a Board Member of the Pine Street Inn and on the Building Committee of The American Repertory Theater in Cambridge. O’Brien is a graduate of Brown University and Suffolk University Law School, and is a member of the Massachusetts Bar.

Kenzie Bok
She is a lifelong Bostonian who grew up in the small downtown neighborhood of Bay Village. She cares passionately about making Boston a great city for people from all walks of life and all stages of life to flourish and put down roots. With a background in affordable housing, budget analysis, and civic engagement, Councilor Bok was elected to represent District 8 on the Boston City Council on November 5, 2019. Her district includes Mission Hill, Longwood, Audubon Circle, Fenway, Kenmore, Back Bay, Beacon Hill, and the West End. Councilor Bok serves as the Chair of the Council's Ways & Means Committee and its new PILOT Reform Committee, and she is also vice-chair of the Housing & Community Development and Community Preservation Act Committees.

Sheila A. Dillon
She is currently the Chief of Housing for the City of Boston and the Director of the Department of Neighborhood Development. In this role she oversees the management of the Boston Home Center, Neighborhood Housing Development, Real Estate Management and Sales, and spearheads the City’s efforts around housing Boston’s homeless. In addition, she leads the Office of Housing Stability, which is charged with protecting residents’ tenancies in Boston’s competitive real estate market.

She currently lives in Boston with her husband and two children.

Symone Crawford
She joined MAHA's staff in 2018 after serving on the board of directors since 2014. She'll be the the Executive Director of MAHA on January 1, 2022. Symone lives in Mattapan and worked for Encompass Insurance for seventeen years, most recently as a claims service leader. She serves on the state's Racial Equity Advisory Council for Homeownership (REACH) and as secretary of the board of the Midas Collaborative.

Symone is an immigrant from the island of Jamaica, migrating to the United States in 1998 and coming to Boston in 1999. She is a graduate of Roxbury Community College, Northeastern University, and Southern New Hampshire University's online MBA finance concentration program. She is very passionate about her faith, her family, and the needs of her community.