In Your Eyes, I See My Country: Live Q&A and Performance 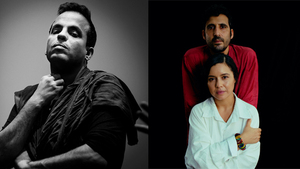 Virtual conversation with Director or In Your Eyes, I See My Country, Kamal Hachkar and film subjects Neta Elkayam & Amit Haï Cohen as well as a musical performance.

SYNOPSIS:
Neta Elkayam and Amit Haï Cohen create music that evokes both their Israeli identities and their Judeo-Moroccan heritage. Through a musical tour of Morocco, the couple attempts to bridge the dissonance in these identities, heal their parents’ wounds of exile, and take in their grandparents’ homeland. With a rich soundtrack of traditional songs, In Your Eyes, I See My Country tells the story of Moroccan Jewry, of a time when Jews and Muslims lived together, and of what was lost and what lives on.

Sunday, November 8, 12:30pm: Included with purchase of ticket or pass.