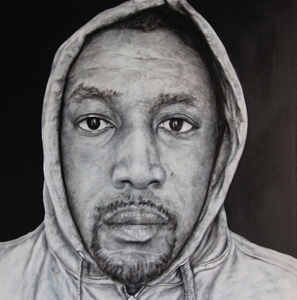 re-presenting representation through political portraiture
Matthew Ivan Cherry – Cesar Conde – Patrick Earl Hammie
February 2 – March 5, 2017
Artist's Reception: Thursday, February 7, 6:00 – 8:00 pm
Can a portrait provide a sense of universal truth to a viewer in order to promote health or well-being or to the degree of saving a life? Can a painting promote a sense of community, a presence of fraternity and sisterhood or general camaraderie while challenging systematic or cultural injustices? Can art serve as a bastion of safety while acting as a civil “call to arms” or by simply alarming the general public to stand and take a stance? Impolite-ic Politics – is an exhibition of large-scale portrait paintings which bring to the forefront relevant political topics; such as police brutality, LGBTQ rights and religion, ethnic stereotypes, and gender role biases that polarize and plague our culture today.

Impolite-ic Politics presents the work of three fine artists using portraiture as a genre to address global, social, political, and controversial issues to address heated topics regarding identity, diversity of ethnicity, sexuality, gender, racial profiling and police brutality, and the gender roles we attach to people of various races. The work is intended to push the envelope and dialogue on issues that continue to challenge people in today’s culture, – while still attempting to elevate and humanize the individuals depicted.

Each artist has been independently producing a body of work with its own scope, measure, title and theme. For “Impolite-ic” Politics” the artwork from these artists have been united to bring awareness to a broader audience certain injustices while also elevating portraiture, painting, and narrative issues that each artist handles uniquely.

(This exhibition will be accompanied by a student exhibition of various work selected from College of Art and Design students who similarly are using portraiture as a genre to form a dialogue around politically charged content relevant to student interests and issues.)