Immigration and Epidemics: An Historical Perspective 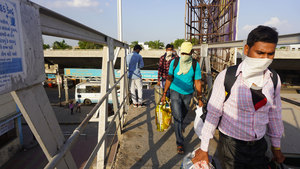 Please register for this Zoom webinar at http://bit.ly/ImmigrationEpidemics

Abstract:
“The Chinese Virus” or “Wu Han Flu” are some of the names coined by President Donald Trump to identify COVID-19. The resulting stigmatization of Asian Americans is just the latest example of the double helix of health and fear that is a perennial in American immigration history and has inspired calls for immigration restriction. COVID-19 has offered today’s restrictionist policymakers a rationale for using legislation designed to protect public health as justification for reducing immigration and refugee admissions as well as delaying asylum hearings. This presentation places in historical perspective the link between public health crises, especially epidemics, American immigration policy, and the American public’s xenophobic fears.

About the speaker:
Alan M. Kraut is Distinguished Professor of History at American University in Washington, D.C. He received his B.A. from Hunter College of the City University of New York (1968) and his M.A. (1971) and Ph.D. (1975) from Cornell University. He holds a faculty appointment at the Uniformed University of the Health Sciences, the armed services medical school, and he is a Nonresident Fellow of the Migration Policy Institute in Washington, D.C.

Dr. Kraut is a past president of the Organization of American Historians, the largest professional organization of those who study U. S. history and current President of the National History Coalition, a consortium of more than 50 organizations that advocates and educates on federal legislative and regulatory issues affecting historians, archivists, political scientists, teachers, students, genealogists, and other stakeholders.

Dr. Kraut is a specialist in U.S. immigration and ethnic history and the history of medicine and public health in the United States. He is the author or editor of nine books and over a hundred articles and book reviews. His books on immigration include, The Huddled Masses: The Immigrant in American Society, 1880-1921 (1982; rev. 2001), American Refugee Policy and European Jewry, 1933-1945 (co-authored, 1987), and Silent Travelers: Germs, Genes, and the “Immigrant Menace” (1994). The latter volume received the Theodore Saloutos Award from the Immigration and Ethnic History Society. His 2003 volume, Goldberger’s War: The Life and Work of a Public Health Crusader was honored with the Henry Adams Prize from the Society for History in the Federal Government, the Arthur J. Viseltear Prize from the American Public Health Association, and the Watson Davis and Helen Miles Davis Prize from the History of Science Society. In 2007, Kraut and his wife, Deborah, co-authored Covenant of Care: Newark Beth Israel and the Jewish Hospital in America. It received the Author’s Award of the New Jersey Studies Academic Alliance. His most recent volume, Ethnic Historians and the Mainstream: Shaping America’s Immigration Story (co-edited) was published in November 2013.

Dr. Kraut chairs the Statue of Liberty-Ellis Island History Advisory Committee of the Statue of Liberty-Ellis Island Foundation. He has also served as a consultant to the National Park Service, and as an adviser to the Lower East Side Tenement Museum. He has been an historical consultant on documentaries treating issues in immigration history and the history of medicine and public health for PBS and the History Channel. In 2017 Kraut received the Lifetime Achievement Award of the Immigration and Ethnic History Society for his contributions to scholarship on immigration history. He is an elected fellow of the Society of American Historians.

Free and open to the public
Sponsored by the Inter-University Committee on International Migration
For more information or accessibility accommodations please contact lkerwin@mit.edu.