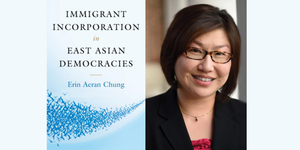 Please register for this Zoom webinar at http://bit.ly/ImmigrantIncorporation

Despite labour shortages and rapidly shrinking working-age populations, Japan, South Korea, and Taiwan shared restrictive immigration policies and exclusionary practices toward immigrants until the early 2000s. While Taiwan maintained this trajectory, Japan took incremental steps to expand immigrant services at the grassroots level, and South Korea enacted sweeping immigration reforms. How did convergent policies generate these divergent patterns of immigrant incorporation? Departing from the dominant scholarship that focuses on culture, domestic political elites, and international norms, Professor Chung’s latest book shows the important role of civil society actors – including immigrants themselves – in giving voice to immigrant interests, mobilizing immigrant actors, and shaping public debate and policy on immigration. Based on more than 150 in-depth interviews and focus groups with over twenty immigrant communities, Immigrant Incorporation in East Asian Democracies examines how the civic legacies of past struggles for democracy shape current movements for immigrant rights and recognition.

Erin Aeran Chung is the Charles D. Miller Associate Professor of East Asian Politics in the Department of Political Science at Johns Hopkins University in Baltimore, Maryland. She previously served as the director of the East Asian Studies Program and the co-director of the Racism, Immigration, and Citizenship (RIC) Program at Hopkins. She specializes in East Asian political economy, international migration, and comparative racial politics. She has been a Mansfield Foundation U.S.-Japan Network for the Future Program Scholar, an SSRC Abe Fellow at the University of Tokyo and Korea University, an advanced research fellow at Harvard University's Weatherhead Center for International Affairs Program on U.S.-Japan Relations, and a Japan Foundation fellow at Saitama University. She also served on the Executive Committee of the Migration and Citizenship section of the American Political Science Association and is currently co-editor of the Politics and Society of East Asia Elements series at Cambridge University Press. She is the author of Immigration and Citizenship in Japan (Cambridge University Press, 2010; Japanese translation published by Akashi Shoten, 2012) and Immigrant Incorporation in East Asian Democracies (Cambridge University Press, 2020). She was recently awarded a five-year grant from the Academy of Korean Studies (AKS) to support the completion of her third book project on Citizenship, Social Capital, and Racial Politics in the Korean Diaspora.

Free and open to the public

Sponsored by the Inter-University Committee on International Migration

The Inter-University Committee on International Migration

Since its establishment in 1974, the Inter-University Committee on International Migration has been a focal point for migration and refugee studies at member institutions, which include Boston University, Brandeis University, The Fletcher School of Law and Diplomacy, Harvard University, MIT, Tufts University, and Wellesley College. The committee is chaired by MIT as a program of the Center for International Studies (CIS).

During each academic year, the Committee sponsors a seminar series on international migration, The Myron Weiner Seminar Series on International Migration, held at MIT's Center for International Studies. The seminars explore factors affecting international population movements and their impact upon sending and receiving countries and relations among them.

Sign up for Migration emails to get notified about upcoming events at https://cis.mit.edu/connect-cis

A full listing of Migration seminars is available at http://bit.ly/MigrationSeminars