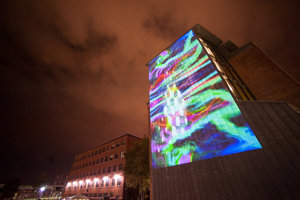 Free and open to the public, ILLUMINUS will take place in Downtown Crossing on Friday, November 3rd and Saturday, November 4th, 2017.

ILLUMINUS is a nighttime festival where Boston’s artists, designers, performers, and creative technologists converge to showcase their most thoughtful, innovative, and imaginative works. The festival will include large scale projection mapping, interactive digital projects, immersive installations and more. This year ILLUMINUS has partnered with LuminArtz and the Downtown Boston Business Improvement District (BID) to present the festival throughout this Downtown neighborhood. The Festival will run from the intersection of Winter and Tremont Street down into Summer street and several blocks of Washington Street.

Established in 2014 in the SoWA Arts District, the festival attracted over 10,000 visitors and activated the historic Power Station with large-scale projection. In 2015 the festival took place on Lansdowne Street, in the Fenway neighborhood, showcased nearly 30 projects and drew crowds of over 30,000 people.

The festival will include projects by the following artists:

And more to be announced!