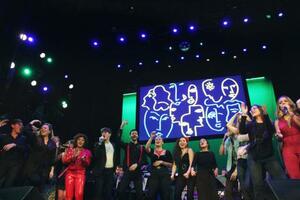 Ídolos Latinos is a musical tribute to the most important Latin American and Spanish artists who throughout the ages have inspired and moved the world including Alejandro Sanz, Gustavo Cerati, Carlos Vives, Luis Miguel, and more. The concert is meant to showcase representative Berklee students and pay tribute to the Latin music sphere, in celebration of the diversity and richness of Latin culture.

This year, Idolos Latinos will be joined by two-time Latin Grammy winner, artist, producer, composer, and arranger Tony Succar. Born in Lima, Peru, and raised in Miami, Florida, Succar's fast-paced songs have unmatched explosive energy, while his slower arrangements are soulful and captivate the listener with the intricate nuances that are signature to his sound.

In 2018, Succar was nominated for the prestigious Latin Grammy Award for Best Tropical Song, “Me Enamoro Mas De Ti.” He received four nominations in 2019 for Album of the Year, Best Tropical Song, Best Salsa Album, and Producer of the Year for his most recent album, Mas de Mi. Tony took home the awards for Producer of the Year and Best Salsa Album, making history as the youngest person to win both categories. He also has been nominated for a Grammy in 2022 for Best Latin Tropical Album.