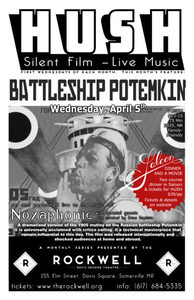 For April we will be showing Battleship Potemkin, a 1925 Soviet silent film directed by Sergei Eisenstein. This film is a dramatized version of the 1905 mutiny on the Russian battleship Potemkin when the crew rebelled against their officers for feeding them spoiled, maggot filled meat. The sailors felt compelled to participate in the revolution happening at home by standing up for themselves and demanding to be treated fairly. This revolt was later considered to be the first step towards the Russian Revolution of 1917. The film is divided into five acts each with it’s own title and is known for an iconic scene in the fourth act “The Odessa Steps” when a line of soldiers march down the steps connecting the waterfront to the central city. The soldiers open fire into the crowd of unarmed citizens, killing men women and children without remorse. In reality, the massacre at the steps of Odessa did not occur, however it is not entirely fictitious either as there were widespread demonstrations in the area at the time, where troops open fired on crowds of people and killed hundreds of citizens.

Today, many films pay homage to this scene, for its innovative montage effect. As one of the first propaganda films of all time, Eisenstein’s intent was to edit the film in such a way as to produce a great emotional response and he was able to achieve this through dramatic editing in this famous scene. The film was released internationally and shocked audiences at home and abroad. The battle scenes were considered graphically horrific for the time and the film was banded in many countries including the Soviet Russia, the Unites States, France, and the UK for its revolutionary zeal. Today Battleship Potemkin is universally acclaimed, critics call it a technical masterpiece for its futuristic montage editing techniques that remain influential to this day.