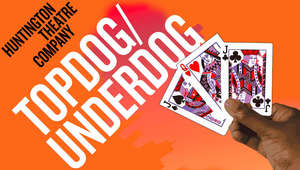 Topdog/Underdog, a darkly comic fable written by Suzan-Lori Parks, tells the story of two brothers, Lincoln and Booth -- names given to them as a joke by their father. Haunted by the past and their obsession with the street con game three-card monte, the brothers come to learn the true nature of their history as they cope with women, work, poverty, gambling, racism and their troubled upbringings. This Pulitzer Prize-winning drama proves that two men in a stark room can generate more energy than the entire cast of a star-spangled mega-musical. The New York Times called Topdog/Underdog a "thrilling comic drama ... dazzlingly written," and now you can enjoy this Huntington Theatre Company production of the darkly comic and deeply theatrical fable at the Boston University Theatre.