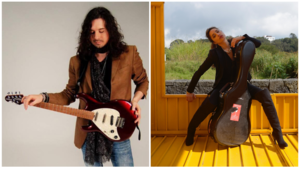 ABOUT SCOTT TARULLI:
Scott Tarulli is a Boston-based guitarist who has played professionally for over 28 years. Influenced by greats like Herbie Hancock, Jimi Hendrix, Cornell Dupree, Bill Evans, Steve Lukather, and James Burton, Tarulli released his debut solo album, "Transitions" in 2004 followed by a live album, "September in Boston: Live" in 2005.

In 2012, Tarulli released a follow-up album titled "Anytime Anywhere" "featuring Tony levin and Jerry Marotta. The instrumental album is full of guitar-oriented rock, funk, and jazz. “Each note played is a complete thought that, put together, makes a fantastic piece of musical literature.” - Bass Musician Magazine.

ZAIRA MENESES & FRIENDS
Zaira Meneses has been acclaimed by the international press as a major performing artist of the classical guitar (New York Times: “an arresting performer full of colorful touches”) and named “An extraordinary virtuosa by composer Leo Brouwer after performing together on stage in 2018 with his famous Elegiaco Concerto for solo guitar and Orchestra. . She was born in Xalapa, Mexico. She began to study the guitar at the age of 7, performing her first solo recital 5 years later. At the age of 15, she co - founded the renowned Orquesta de Guitarras de Xalapa and toured internationally with this ensemble as its youngest member. At 17 she won first prize at the prestigious Concurso Nacional de Paracho for solo guitar and at 19, with her performance of Rodrigo’s Concierto de Aranjuez, Zaira Meneses became the first woman and youngest top prize winner in the history of the Guanajuato Guitar Concerto Competition. This triumph led to numerous performances throughout Mexico and abroad. Ms. Meneses has continued and expanded her career, performing in many of the world’s greatest concert halls such as Alice Tully Hall, Carnegie Hall, and the 92nd St. Y in New York City, Jordan Hall in Boston, the Solitaer of the Universitaet Mozarteum in Salzburg, the Accademia Chigiana in Siena, Italy, the Great Hall of the Shanghai Conservatory and in numerous other venues on four continents. In her tour of China in the summer of 2014 .

Award winner of The Boston Foundation 2018- 2019 as a performer and event planner for her concert series, festivals and workshops. Since 2006 Meneses has built an impeccable reputation as a Co-founder, outreach director and event planner for the world known International festival : Boston Guitar Fest, hosted at New England Conservatory and Northeastern University. Parallel to her own solo career, she created her own international events: Latin American Music Festival, Guitar and Friends Concert Series and her latest accomplishment : ZAMA a new association to provide scholarships to Latin American Students. She continues collaborating with important institutions and venues such as : The Rivers School Conservatory, New England Conservatory, Carriage House Violins, Northeastern University, Mozarteum Austria, University of Veracruz Mexico. Ms. Meneses has recorded one independently produced, highly acclaimed solo CD (“Latina”) with a second all Bach CD released with Centaur Records in early 2018.She is now faculty of The Rivers School Conservatory and New England Conservatory. Lives in Newton, Spain and Salzburg with her pianist daughter Raquel Fisk and her husband Eliot Fisk.

Felipe Collia, originary from Veracruz, learned how to play the jarana at early age. He left the port of Veracruz to study Business in Tabasco University. He started to feel nostalgic about his hometown and that pushed him to get closer to his culture and discovered for the second time Son Jarocho.

Since that time, he has participated in regional fandangos for more than 10 years and participated as principal Jaranero from the Reyes

NOTE: This event was rescheduled from 4/30 to 7/31. All tickets purchased for the original April 30 date will be honored.