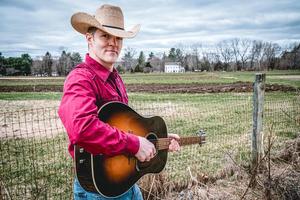 When it comes to country music, Houston Bernard is the real deal. Born in Oklahoma, he is the direct descendant of George “Bittercreek” Newcomb, a famous gunfighter and member of the Wild Bunch, among the most wanted men of the 1890s. His father and uncle played in country bands backing up stars including Tanya Tucker and Sleepy LaBeef, and were staples in the Oklahoma and Nashville scenes in a group called the Rebel Brothers.

Bernard draws his inspiration from his family’s country and rockabilly roots. His music is upbeat and relatable, with powerful vocals and a country twang.

Bernard has shared bills with country superstars like Luke Bryan, Old Dominion, Granger Smith, Montgomery Gentry, Marshall Tucker Band, and Clint Black. Popular on Spotify and YouTube, Bernard has reached both new and established country fans. His music has been featured on Country Rebel, CMT, The Heartland, and The Country Network.