House of Several Stories: A Tragedy in Two Acts of Nonsense 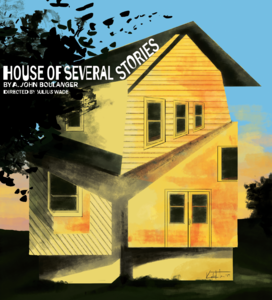 House of Several Stories: A Tragedy in Two Acts of Nonsense
By A. John Boulanger

Presented by Harvard-Radcliffe Summer Theater
Tickets from $15, or $5 with Student ID

House of Several Stories: A Tragedy in Two Acts of Nonsense is an absurdist comedy about a dysfunctional family and their Thanksgiving "guests." Bastian returns home for Thanksgiving with news of "joining the service." Mother suggests he join a gym. Bastian's news takes a backseat when his sister, Rissa, suddenly decides that she's pregnant, and though not yet showing, expects to deliver "any minute now". Both children are then bombarded with Mother's news of an older brother that they've never known about, Thom, who has returned home for Thanksgiving from the war. Things are further complicated with the arrival of the mysterious, young Abigail, who has simply stopped by to drop something off: her newborn baby. That is, until she discovers the baby's father might be in the house. The play explores how stories help fill voids in people's lives caused by death, loss, and dysfunction.

Content Warning: This production contains discussion of suicide as well as a prop gun and gunshot sound effects and is not recommended for children under 13.