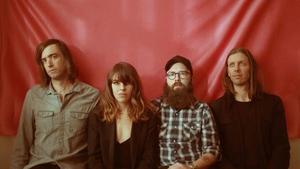 Hop Along started off in 2004 as an acoustic solo project of vocalist and songwriter Frances Quinlan. She released her debut album (Freshman Year) in 2005 and 4 years later, she recruited her brother Mark (drums) and bassist Tyler Long to turn the project into a band. She said in an interview, "I would envy [full ensembles] because I thought that a band inherently carries more energy than a person does solo. I suppose you could argue that point, but when I was playing by myself it was just out of necessity. I wanted to play and I just couldn’t seem to get a band together." Their musical style is best described as a blend of indie rock (a genre of alternative rock that originated in the United States and the United Kingdom in the 1980s, encapsulating the genres chamber pop, indie pop, lo fi, math rock, neo psychedelia, post punk revival, sadcore, and shoegaze) and post punk revival (genre of alternative rock and indie rock that developed in the late 1990s and early 2000s, inspired by the original sounds and aesthetics of garage rock of the 1960s and new wave and post-punk of the 1980s). They've released 3 studio albums and 3 extended plays.