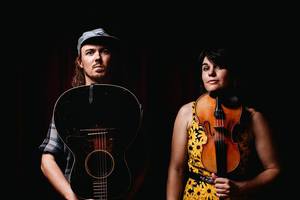 Hoot and Holler are the sum of two parts: guitarist Mark Kilianski and fiddler Amy Alvey. Each are songwriters dedicated to honing their craft, both equally influenced by wordsmiths like Gillian Welch and Townes Van Zandt as they are to authentic mountain musicians like Roscoe Holcomb and Ola Belle Reed. After spending the better part of 2016 living in a camper van while playing shows across the country, they now call Asheville, North Carolina their home.
www.hootandhollermusic.com

Jeff Butcher is an American singer, songwriter and Instrumentalist. He has just released a 5 song EP titled American Radiation. Jeff has toured Nationally and in Europe, solo and with several projects spanning different genres, playing stages at Summerfest, SXSW, CMJ, CMW, Savannah Stopover, and SoFar sounds: Boston, Chicago and Athens. Over the past 10 years he has played with various acts around Boston, including actor David Duchovny's band, and is working on blending Folk and Early Americana with Soul, British Rock, 70's Power Pop, and New Wave influences.
americanradiation.com