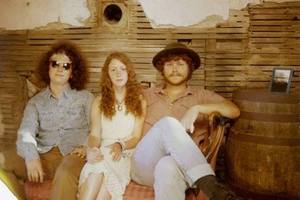 Honeysuckle is a progressive folk act that blends older influences and traditional instrumentation with modern effects and inspiration.

Comprised of Holly McGarry, Benjamin Burns, and Chris Bloniarz, this Boston based band can frequently be found performing across the country, playing alongside bands like The Ballroom Thieves, The David Grisman Sextet, Boy & Bear, Sam Moss, The Western Den, The Novel Ideas, Shook Twins, John Craigie, Damn Tall Buildings and others.

Honeysuckle has performed at Newport Folk Festival, Lollapalooza and CMJ, was chosen as a Converse Rubber Tracks artist, and has been nominated for Best Folk Artist of the Year, and Best Americana Artist of the Year three years in a row at the annual Boston Music Awards. They were also put in the Top 10 bands of 2016 So Far list compiled by NPR.