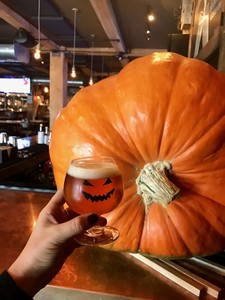 Halloween, a time for mini fairy princesses and superheroes to try and look their cutest in the hopes of scoring an extra piece of candy. But then, us adults had to one-up the tradition with gore, boozy-everything and costumes that would have corpses rolling in their graves. In comes City Tap House who brings us three days of ghoulish fun for your inner witch, warlock or wizard in addition to a series of All Hallow’s Eve-inspired cocktails: Bloody Mimosa (champagne & blood orange juice - $5); Jäger Bombs (orange Red Bull - $8); Back from the Dead (Godiva white chocolate, Stoli Vanil, raspberry liqueur & milk ($10); and, a sharable potion for-two.

Hocus Pocus ‘90s Brunch – Saturday, 10/27, from 11am-3pm
City Tap will be cooking up some magic that could have the Sanderson Sisters green with envy: booze-laced, formerly kid-friendly cereals. From the caldron, there is limited-edition Cap’n Crunch that will turn your boring white milk green, and Count Chocula with monster marshmallows and Godiva white chocolate-Stoli Vanil milk, among other hangover specials from the kitchen. Be prepared to be bewitched when the “Bubble, Bubble! I'm in Trouble!” sharable cocktail is in front of you, or opt for a Monster Ale from Brooklyn Brewery while lining your pockets with swag and capturing the moment at their Polaroid camera station. Don your best Winifred wig (or any ‘90s obnoxiousness will do) and enjoy treats from the City Tap candy supply.

(City Tap) House of Horror – Saturday, 10/27, beginning at 9pm
By nightfall, the Fort Point hotspot will transform into the “(City Tap) House of Horror,” the alternative to another basic night at the club. With DJ Sprino dizzily spinning so revelers can show off their best Thriller moves, there are big stakes for those who take their costume game to the next level. At 11:30pm, the two winners will be announced: the group donning the “best in show” will take home $1,000 cash, and the best soloist will leave with $500. Bonus: Get before 10pm and be entered into the door prize draw to win a brunch for-four back at the scene of the crime.

Zombie Brunch – Sunday, 10/28, from 12-4pm
Admit it: On more than one occasion, you’ve fallen asleep fully clothed after a long (and devious) night. The plus is City Tap encourages you to do the “walk of shame” to their house on Sunday morning, looking all zombie-ish in your costume from last night, for the ultimate hangover brunch. While you’re ordering up fried delights that would put greasy spoons to shame, experience flashbacks from the weekend as DJ Sprino plays “that” song where you took over the dance floor.

Cisco TaleGate, Halloween Edition – Monday, 10/29, from 6-8pm
The Patriots are in Buffalo but City Tap will be repping the home team at their next “Cisco TaleGate” viewing party. With the firepits roaring and bean bags flying in cornhole, throw it back to childhood while bobbing for apples or entering into the mummy-wrap contest. In addition to buckets of Whale’s Tale cans and giveaways, CTH also will feature a Cisco Pumpkin Drumkin draft ($6.50).

Admission is complimentary. Food and beer specials available at a la carte pricing.