Historical Reenactment of Susan B. Anthony by Sheryl Faye Presents 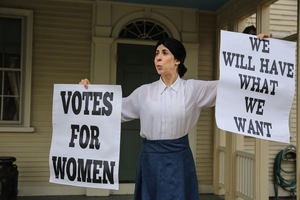 On August 26th professional actress, Sheryl Faye, is teaming up with the Susan B. Anthony Birthplace Museum in Adams, MA to commemorate the 100th Anniversary of the passing of the 19th Amendment. The museum will present Faye’s historical reenactment entitled Susan B. Anthony – Failure is Impossible. This 45-minute, pre-recorded, virtual show will be available from 1-7 p.m. at http://www.susanbanthonybirthplace.com.

“We at the Susan B. Anthony Birthplace Museum are delighted by Sheryl Faye’s generosity in providing her Susan B. Anthony program free of charge for the education and enjoyment of our museum community,” says Museum Executive Director, Cassandra Peltier. “All of us living in 2020 have an amazing resource that the suffragists did not: the internet! Thanks to virtual networks we can commemorate the histories of activism exemplified by people like Susan B. Anthony who shaped this country and changed U.S. laws for the better.”

“It’s a huge honor for me to be able to share this timely performance with the public,” says Faye. “Susan B. Anthony was a women’s rights activist, and she devoted her life to racial, gender, and educational equality. It’s an important time, especially during an election year, to reflect how so many individuals worked so hard for women to have the vote.”

Peltier adds, “Susan B. Anthony worked for over 50 years to earn women the right to vote. Even though she did not see the passage of the 19th Amendment, she never wavered in her determination. She knew the day would come when her dream - and the dreams of countless women - would come to fruition, and women would have the power to change and enact the laws which impacted their daily lives. Susan B. Anthony’s story of hard work, intellect, and perseverance is exactly the kind of inspiration we need today.”

This is a free event. 100% of donations made will benefit the Susan B. Anthony Birthplace Museum.

About Sheryl Faye
Professional actress Sheryl Faye's unique program about historic women has developed a loyal following among surprising audiences. Schools, libraries, historical societies and all-women’s organizations across the U.S. are repeatedly engaged with her live, one-woman, low-tech performances. The performances are not only entertaining and educational, they also help audiences truly understand the profound, positive impact these women have made in history, as well as their ties to New England.

Faye, a graduate of Emerson College, has numerous television credits include a principal role in a recurring episode of PBS' “Fetch.” She has treaded the floorboards of many a local and regional theatre and appeared with several acting companies, such as Stagecoach Improv, with which she worked closely performing and writing sketch comedy and teaching for top businesses such as TD Bank, IBM, NYU, Philips and more. The multifaceted actress also has various film credits to her name, as well as voice over work for Sony Play Station, Vick’s Cold & Flu, medical training and trade show presenter engagements.

Faye currently performs 8 different one-woman acts: Helen Keller, Susan B. Anthony, Clara Barton, Abigail Adams, Anne Frank, Amelia Earhart, Eleanor Roosevelt and Sally Ride. She has presented these live historical reenactments for over 17 years and now offers all of these programs online with a professional, production-quality, virtual experience since the beginning of the pandemic. She believes that these performances serve not only as history lessons, but as inspirational moments. “I think it's so important to remind us all that anything is possible in life, to make the most of your life as these women did,” she notes.

For more information about Sheryl Faye, including her resume and sample list of where she has appeared in historic women performances, please visit sherylfaye.com. You can find photos, additional testimonials and more at facebook.com/SherylFayePresents.