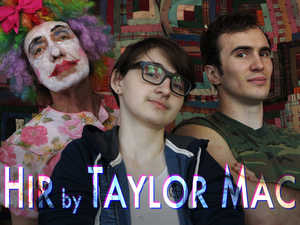 Buy half-price $15 tickets with this link:

"Sensational — in all senses of the word... audacious and uproarious." —NY Times

Apollinaire Theatre Company presents Taylor Mac’s sly, subversive comedy begins with prodigal son Isaac returning from the war, only to find a house in revolt. Liberated from an abusive marriage, his mom Paige is on a crusade to dismantle the patriarchy. His sister Maxine is no longer his sister but his transgender/genderqueer sibling Max who uses the pronouns ze and hir. His once violent father is being fed estrogen and dressed as a clown. But in this anarchic reimagining of the classic American kitchen sink drama, annihilating the past doesn't always free you from it.

Named "one of the most exciting theater artists of our time," (TimeOut NY) for the last 20 years Taylor Mac has created internationally award-winning performance events that at once provoke and embrace diverse audiences. Mac's The Lily's Revenge explored questions of equality, myths, and traditions at the American Repertory Theater in 2012.

In Hir, Mac explores the thorny question "what responsibility do we have to something that has been abusive to us?" and the divide between those who are moving forward and those who are left behind. “..this transgender character, Max, is kind of stuck in the middle a little bit. In a lot of ways it’s my way of saying, what if America (we always think of the prodigal son as the metaphor for America), what if the metaphor for America was the transgender kid instead? What does that do to our understanding of the United States?"

Performances will be followed by a Reception with the actors.