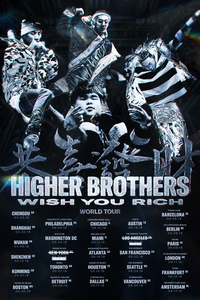 In support of their Five Stars album, Higher Brothers are headlining their 27-date world tour throughout China, North America and Europe. Kicking off in Higher Brothers’ hometown of Chengdu on March 23rd, the tour makes stops in Shanghai, New York, Chicago, Los Angeles, and the world’s biggest hip-hop festival, Rolling Loud in Miami. In September, Higher Brothers will perform in Europe for the very first time with headlining shows in Berlin, Paris, London and more. Several dates have already sold out but limited tickets are still available at www.higherbrotherstour.com.

“The current breakout stars of the Chinese hip-hop world,” (The New York Times) Higher Brothers are defining what it means to be Chinese in an increasingly globalized, internet-fueled world. Recently named ‘2018 Hip Hop Artist Of The Year’ by NetEase (one of China’s top music streaming platforms with over 600M active users) and featured in extensive profiles by international media like CNN, Vice News, Rolling Stone and Los Angeles Times, Higher Brothers are already the most heralded rappers in Chinese history and this is only the beginning. Best known for acclaimed singles like “Made In China” and “WeChat,” the group “have held a certain panache for tapping into the sweet spot of rap culture that bridges the Eastern and Western hemispheres.” (XXL) Since last year’s release of their debut album, Black Cab, Higher Brothers have exploded onto the world stage, racking up over 250M streams globally and appearing on tracks with many of hip-hop’s most exciting up and comers, including Blocboy JB, Ski Mask The Slump God, Goldlink, 03 Greedo and many more. They were featured alongside Joji, Rich Brian and AUGUST 08 on “Midsummer Madness,” the lead single from 88rising’s group album that reached #1 on Spotify’s Global Viral 50 chart. Higher Brothers have also been tapped by brands like Adidas, Sprite and GUESS, and even connected with Russell Westbrook for an Air Jordan campaign in China. With their sophomore album, Five Stars, dominating the charts as the biggest Chinese hip-hop album ever and more unexpected collaborations on the way, “Higher Brothers’ success story is more than a tale about four kids “making it”—it’s emblematic of a bigger trend towards globalization in hip-hop.” (GQ)