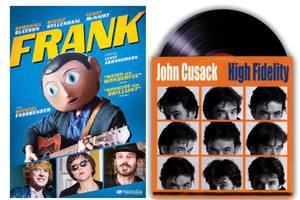 Two Rocking movies for the price of one!

High Fidelity was directed by Stephen Frears and adapted from Nick Hornby’s popular 1995 novel. Music snobs loved and cringed with recognition at the characters in the book, which was originally based in London. The film was set in America, particularly Chicago, and the lead character was played by John Cusack. Many lovers of the original text were relieved by the casting, Hornby included.

Several fictional bands are featured in High Fidelity: who can forget The Kinky Wizards, Sonic Death Monkey, I Sold My Mom’s Wheelchair, and of course Barry Jive and the Uptown Five. All of these bands orbit around Rob’s record store: a hangout for employees and customers, all of whom are unapologetic music snobs, and reluctant adults.

High Fidelity introduced a lot of people to Jack Black, who stole many of the scenes. The film also introduced viewers to the Beta Band, and reintroduced us to Lisa Bonet. The soundtrack was painstakingly curated, and as a fellow music snob I can vouch for its greatness.

Frank is a wonderfully weird Irish indie film that I saw in the theater and loved so much that I ended up seeing it again that same week. Author Jon Ronson wrote a newspaper article about his time with the late British Comedian Chris Sievey, who performed wearing a giant paper-mache head under name Frank Sidebottom.

In the film, Jon is the newest band member, and struggles to find his creative voice. His songs sound like popular songs, and his lyrics are uninspired. Holed up in remote studio, Jon documents the band’s efforts via social media, leading them to become a cult favorite.. even getting invited to perform at SxSW. When Frank himself tries to be more likable and mainstream, everything falls apart. He is no longer authentic, and his mental illness is exacerbated

The Soronprfbs are the fictional band and their moody music was performed by the actors. Frank the mercurial frontman is played by Michael Fassbender , who wears the Frank Sidebottom head for the majority of the film. While the concept of the tortured genius is well trodden, Frank explores barriers in bonding as a band when there are differing visions, language and levels of trust.

Darkly comedic, Frank’s touching and melancholic ending that will stick with you.

And remember, the safe word is “chinchilla”