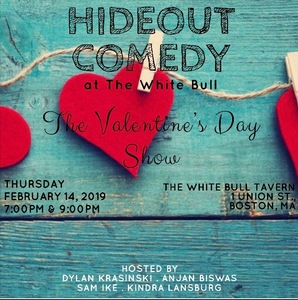 Our Valentines day shows combine a romantic atmosphere with the perfect aphrodisiac - a night of stellar comedy!
Are you single? WHO CARES! Celebrate Galentines with hilarious internationally renowned headliner Ray Harrington of Hulu's Be A Man!
Ray Harrington is an infectiously charming comedian who performs across the globe with hilariously irreverent material and marvelous improvisational riffing that embraces the uncomfortable and the absurd with a smile. His documentary BE A MAN won the LA Comedy Festival and was featured as ‘New and Noteworthy’ Internationally on iTunes before premiering exclusively on Hulu. His first album from Stand Up! Records, The Worst Is Over, debuted at the top of the comedy charts on Amazon and iTunes. His latest album, Overwhelmed, debuted at Number 1 on Amazon and at the top of the Billboard Comedy Charts.

Choose between just a show ticket or include a prefixed 3-course meal. 7pm and 9pm Shows.

HIDEOUT COMEDY is back at a brand new location right around the corner, the WHITE BULL TAVERN! Located right in the heart of historic downtown Boston, come get a taste of the absolute BEST stand-up comics working today. These comedians are all pros, many having had their comedy featured places like Comedy Central, Funny or Die, Netflix, and more!
Past performers include Gary Gulman, Myq Kaplan, Rich Vos, Corinne Fisher, Alonzo Bodden and Mark Normand.

Can't ask for a better way to spend the weekend!